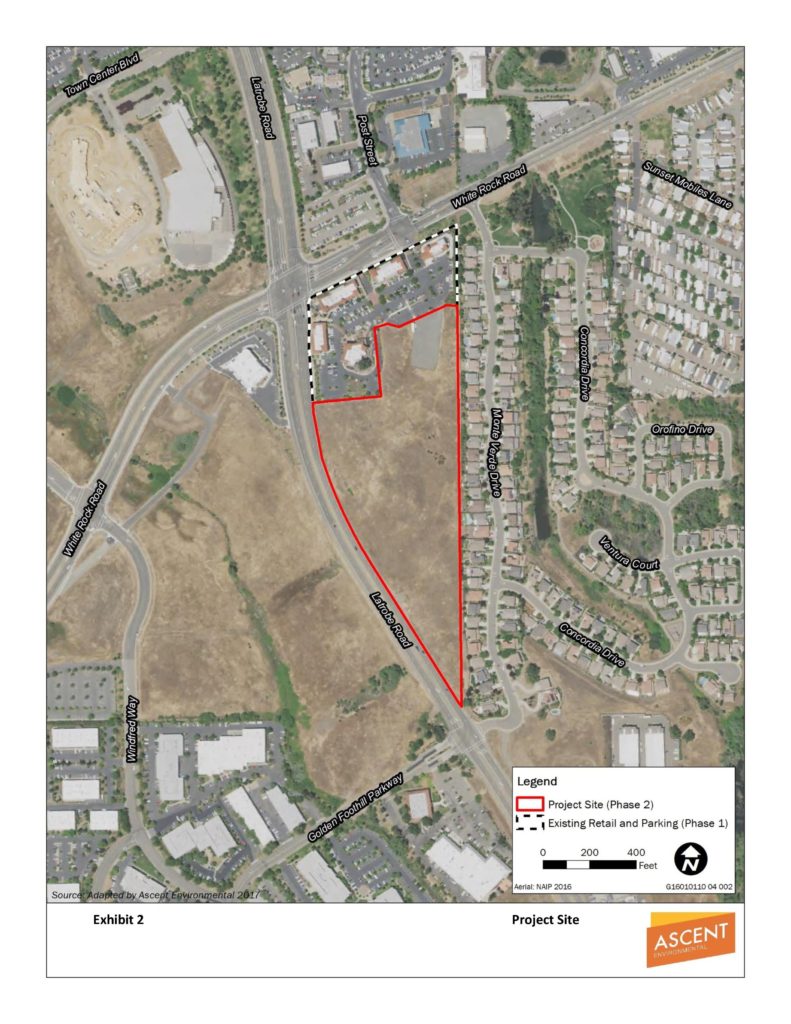 The County of El Dorado Planning Commission will hold a public hearing on March 25, 2021 at 8:30AM to consider:

County Staff Reports and the project Final Environmental Impact Report (FEIR) as referenced in the Public Notice, have not yet been made available on the County’s Legistar website, or on the County’s eTRAKiT website. Project Documents are typically available about two weeks prior to a public hearing.

Any written correspondence should be directed to the County of El Dorado Planning and Building Department, 2850 Fairlane Court, Placerville, CA 95667 or via e-mail: planning@edcgov.us. 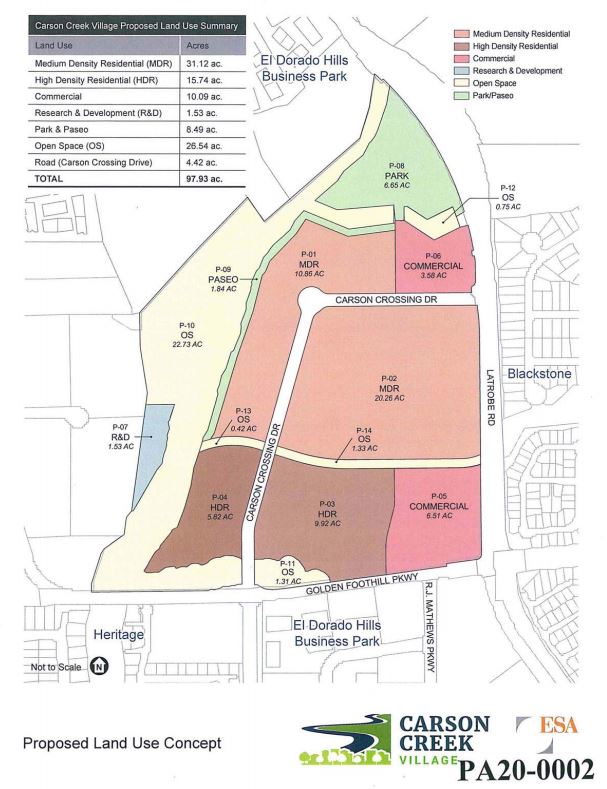 J6 Conceptual Review at the Board of Supervisors

The County of El Dorado Board of Supervisors will hold a public hearing in the Supervisors Meeting Room, 330 Fair Lane, Placerville, CA 95667 on February 23, 2021, at 1:00 p.m., to consider Pre-Application PA20-0002/Carson Creek Village Specific Plan Conceptual Review submitted by ANDREA MATARAZZO/PIONEER LAW GROUP for an Initiation Hearing (Conceptual Review) of a proposed Specific Plan that would allow medium- and high density attached and detached residential development with a potential build-out of 600 to 800 dwelling units, approximately 110,000 square feet of new commercial floor area, approximately 8.5 acres for a park and paseo site, and approximately 26.5 acres of open space. The property consisting of 98 acres, is located within the central portion of the existing El Dorado Hills Business Park, along the west side of Latrobe Road, north of the intersection with Golden Foothill Parkway 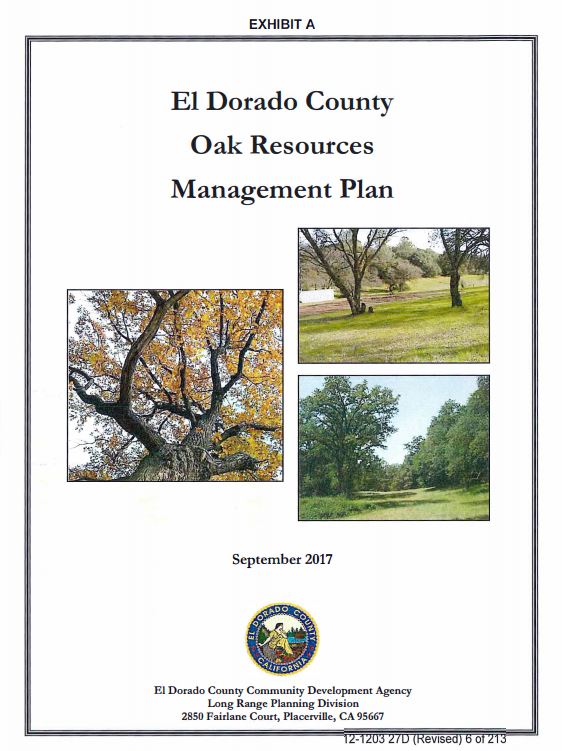 The County of El Dorado Board of Supervisors will hold a public hearing in the Supervisors Meeting Room, 330 Fair Lane, Placerville, CA 95667 on October 20, 2020 at 11:00 a.m., to consider: 1) the adoption of a Resolution to partially decertify the Final Environmental Impact Report (FEIR) for the General Plan Biological Resources Policy Update (Project) only as it
relates to the County’s determination that focusing on preservation of oak woodland habitat in the Highway 50 corridor was not the best course of action and it was not feasible to focus on preserving the oak woodlands within the Highway 50 corridor; 2) directing staff to augment the administrative record as authorized by CEQA, including the missing reports and studies, as set forth in the court’s ruling in Rural Communities United v. County of El Dorado, Superior Court of the County of El Dorado, Case No. PC20170536; and 3) the adoption of a Resolution to recertify the portions of the FEIR that were decertified by the adoption of the prior resolution. The proposed action is in response to the Court’s orders in the writ issued in the above noted litigation. The FEIR for the Project was certified by adoption of Resolution 127-2017 on October 24, 2017. The proposed decertification is a partial decertification; all other parts of the FEIR/EIR will remain in effect. 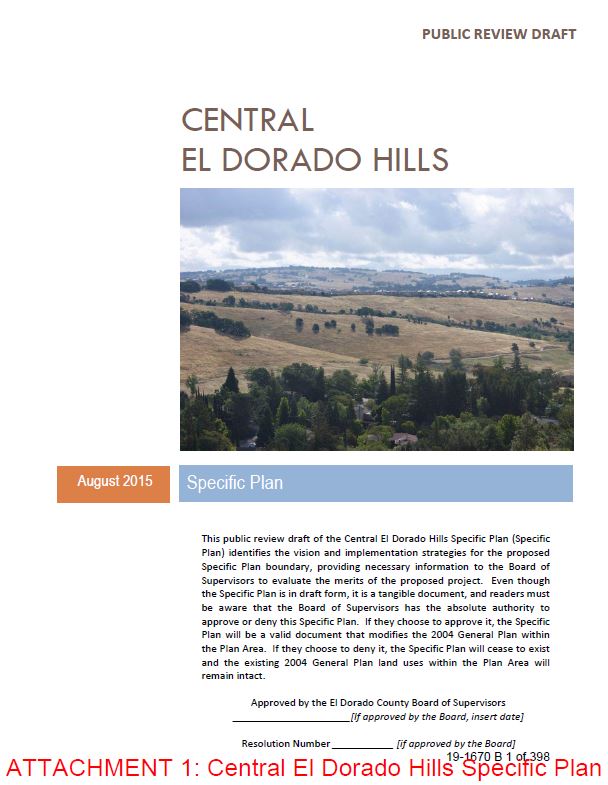 From the the Planning Department update:

During today’s agenda review meeting with Planning Commission Chair Gary Miller, Dave Livingston, and Tiffany Schmid, the following Planning Commission hearing schedule was determined for the Central El Dorado Hills Specific Plan project.  This will allow several opportunities for public testimony and also comply with the Board’s direction on November 5th to hold a Special Meeting in January 2020 in El Dorado Hills during the evening.

**Public Testimony will be taken at the November, December and January (Special Meeting) hearings and then closed for Planning Commission deliberation and action at the final hearing in January/February 2020.
Hearing #1 – November 14, 2019 Regular Planning Commission Meeting (Building C Hearing Room)(meeting to be continued to December 12, 2019)

The El Dorado Hills APAC Wednesday November 13th 7PM meeting be focused on an overview and recent changes to the proposed Central El Dorado Hills Specific Plan in a presentation by representatives of Serrano Associates.

This is an opportunity for El Dorado Hills residents to learn about the proposed project, and a question and answer session will follow the presentation. Keep in mind – El Dorado Hills APAC has no land use authority, and only provides resident feedback on proposed development projects to the Applicant, the County Planning Department, the Planning Commission, and to the Board of Supervisors. We will be conducting a respectful discussion with the project applicant, who is under no obligation to appear at our EDH APAC meeting. We appreciate the applicant’s effort in providing a review and discussion of their proposed project. 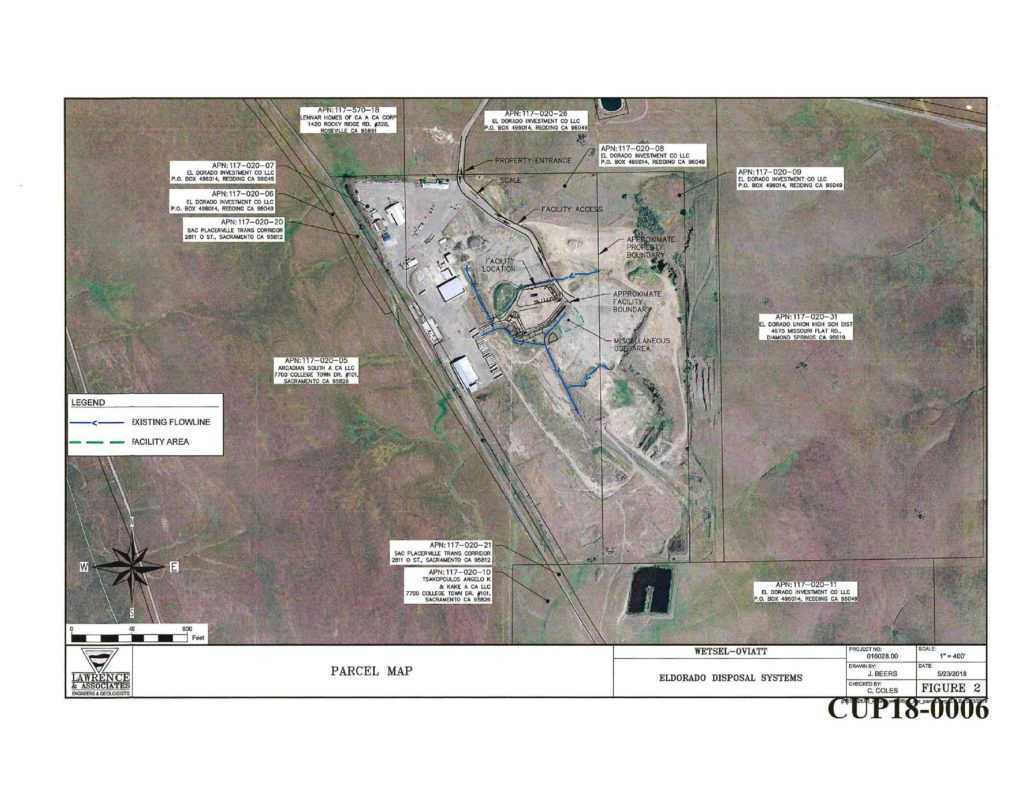 Nine new supporting documents have been added to the eTRAKiT file for the proposed Conditional Use Permit for El Dorado Disposal to operate a  temporary debris and green waste processing facility.

The property, identified by Assessor’s Parcel Numbers 117-020-08 and 117-020-09, consists of 97 acres, and is located on the end of Wetsel/Oviatt Road  approximately 1.4 miles west of the intersection with Latrobe Road, in the El Dorado Hills area. This will function as a temporary sorting location for the existing Material Recovery Facility (MRF) on Throwita Way in Placeville/Diamond Springs while the existing MRF is reconfigured and soil contamination is corrected over a proposed three year period.

The Throwita Way MRF will continue to be used for serving the public. Materials from the MRF will be transported by El Dorado Disposal vehicles to the Wetsel/Oviatt Road temporary facility for sorting. From there the sorted materials will enter the existing El Dorado Disposal waste streams. There will be no public access at the Wetsel/Oviatt Road temporary facility, and no access from other commercial or municipal waste handlers.

Ditches and berms exist on‐site that direct some run‐on stormwater around the site and into an existing stormwater basin. Minor grading and culvert installation would occur to create drainage
swales to route all stormwater run‐on around the facility and stormwater runoff into a proposed stormwater basin. Minor grading would also occur to construct a level pad for the C&D sorting line.
Overall, temporary site construction activity would consist of minor grading to construct a level pad and drainage swales, excavating a stormwater detention basin, construction of a temporary concrete pad, installation of temporary trailer/office, portable toilets, and temporary power, and paving portions of the site. Construction activity is expected to last 20 working days. The temporary site would require approximately 700 cy of soil fill and 3,000 cy of soil cut. The excess soil quantities would be stockpiled on‐site. Construction of the temporary site is expected to take approximately 20 workdays.

As previously indicated, the MRF operates under an existing special use permit. Because this project is primarily a renovation of existing operations, the existing special use permit would be revised via an updated Conditional Use Permit. As part of the revision, the total allowable daily tonnage would no longer be split up into waste types, but instead simplified to 700 tpd maximum. This maximum tpd is consistent with the existing permit, but allows for more flexibility in the amount of each waste type received. Actual waste processed at the site is not expected to change as a result of the renovation or update to the Special Use Permit. 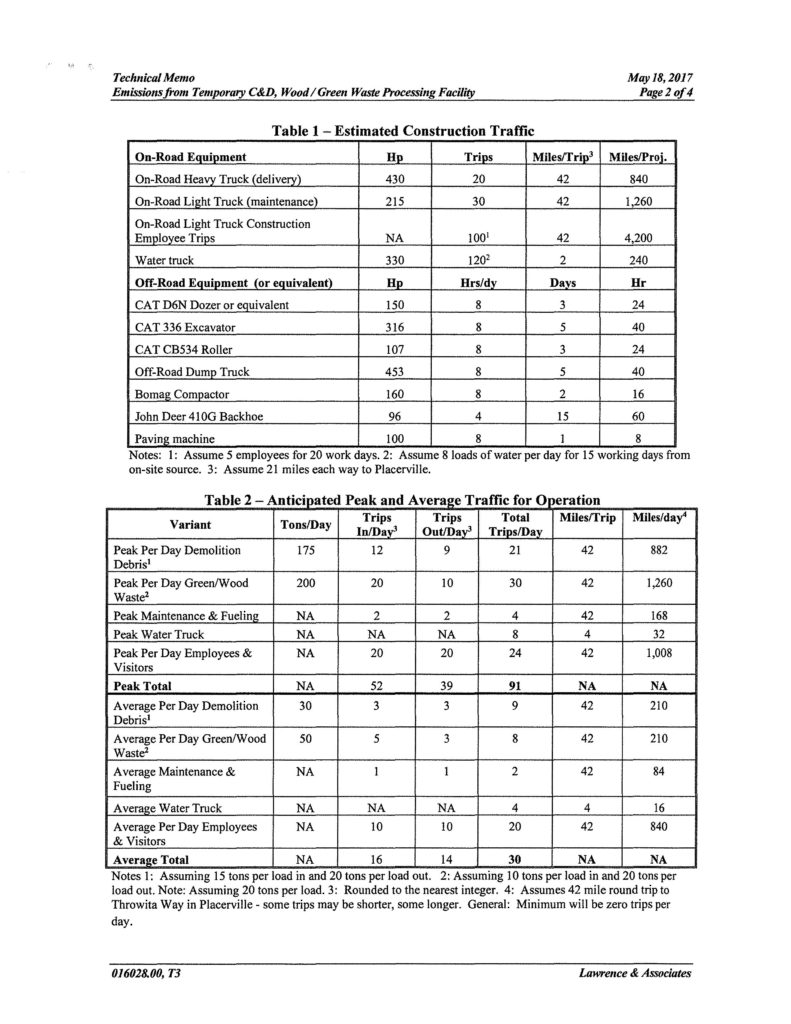 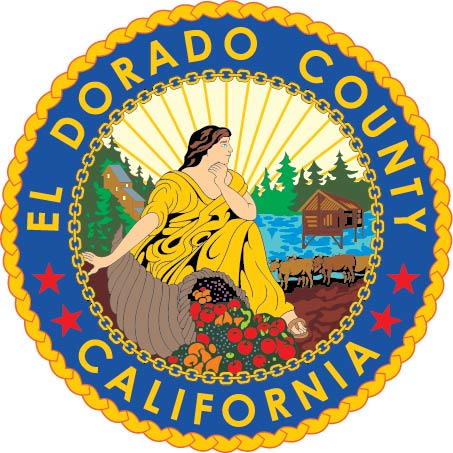 El Dorado County has announced the recently updated the Zoning Ordinance (Title 130 of the County Ordinance Code) with minor amendments. Most of the changes were correcting minor
formatting errors and typos to ensure internal consistency between the Articles contained within the Zoning Ordinance. The amendment also included 11 parcel specific rezones to several properties which were identified as having a documented mapping error.

The adopted ordinance is posted on the County website at: https://www.edcgov.us/Government/longrangeplanning/Pages/2017-Zoning-Ordinance-Updates.aspx 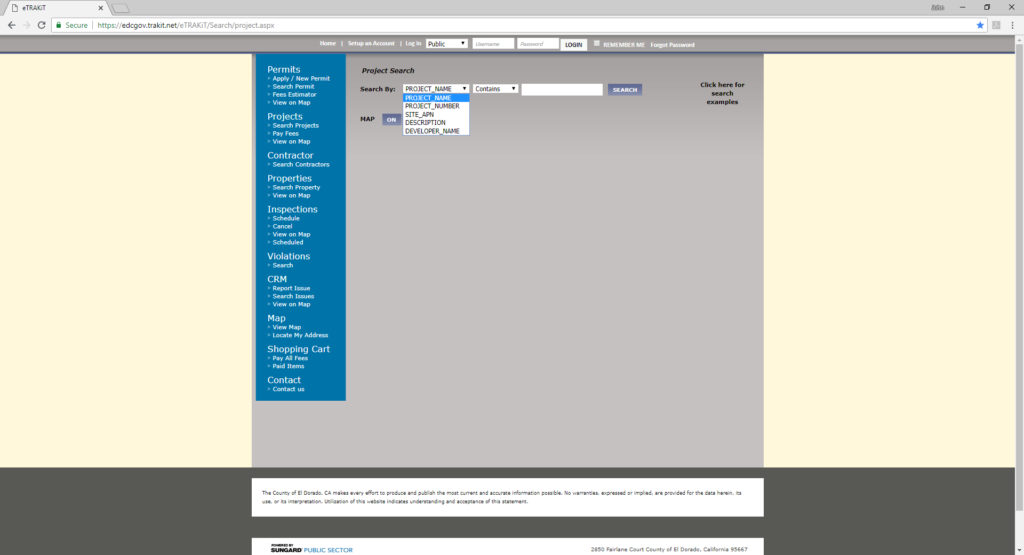 Temporary Information Trailer to answer questions regarding the units and amenities within a new senior living facility while it is being built at 2020 Town Center West Way, El Dorado Hills 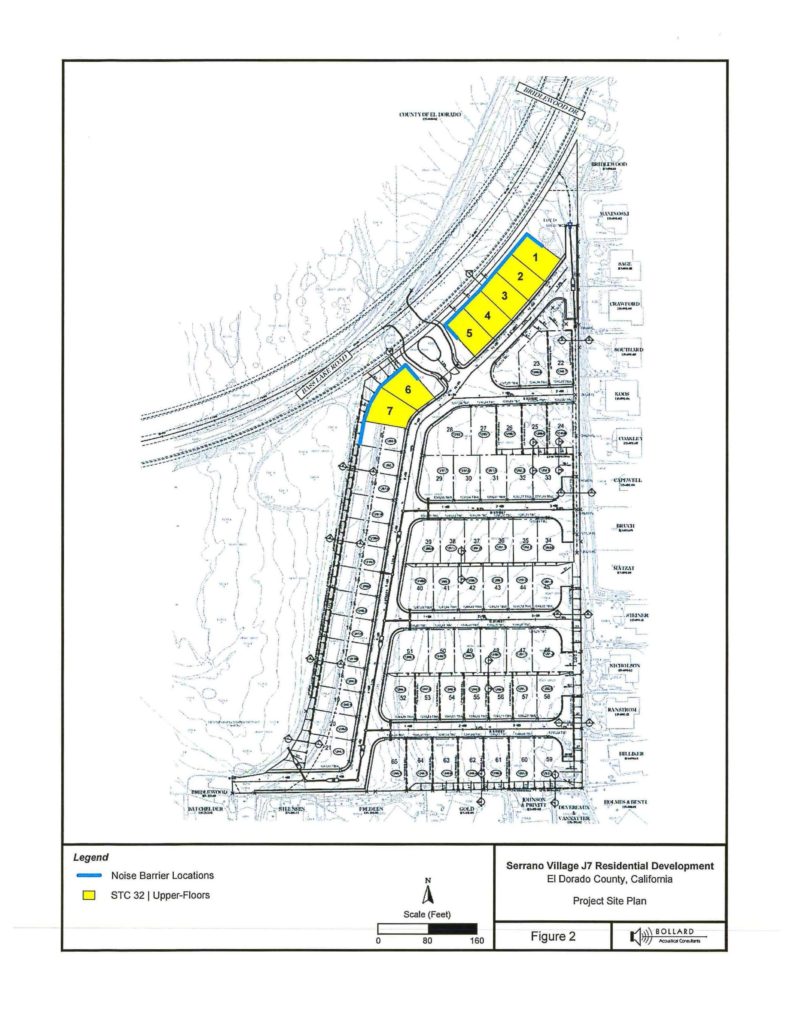 El Dorado County has switched away from the legacy Project Status pages ( here and here ) for tracking project documents (not on the Legistar Calendar, for agency actions), to a new online permit tracking website. The old Project Status search pages would allow a user to select a specific area: El Dorado Hills, Cameron Park, Rescue, etc -or a Supervisor District. It would also allow users to search for specific types of documents:  Design Review, General Plan Amendment, Parcel Map, Rezone – or even ALL documents types 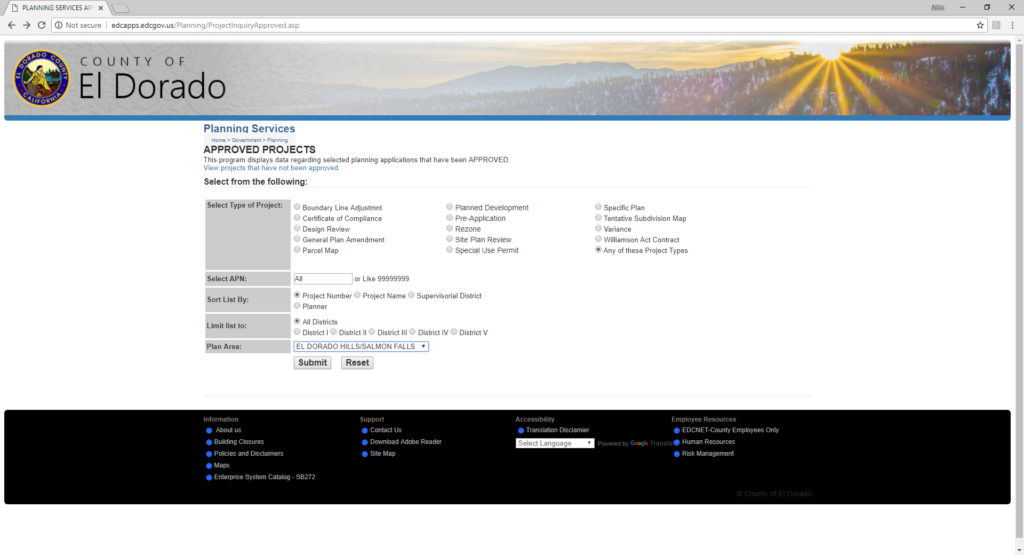 Then it would generate a search result listing of all projects that matched: 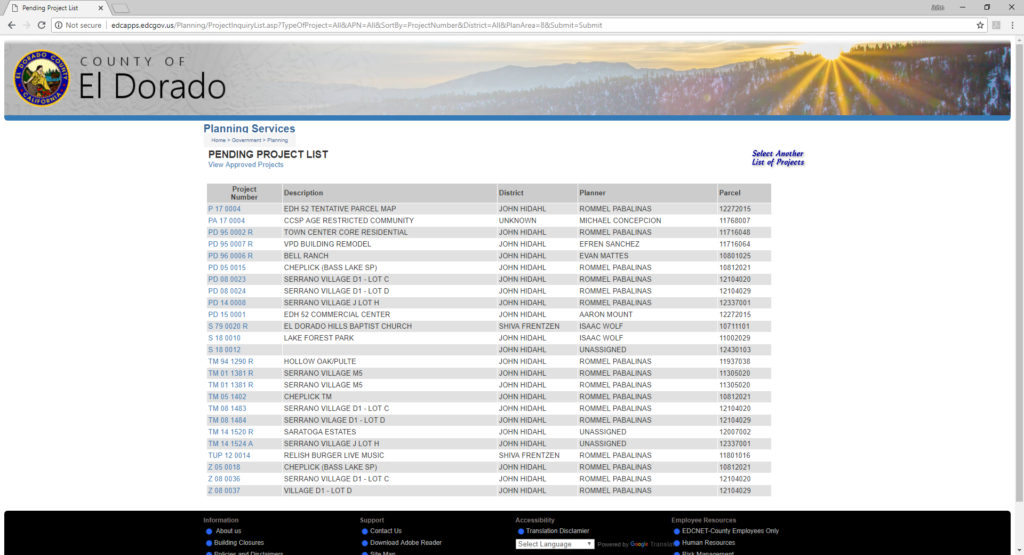 The new site eTrackiT has been difficult to navigate, as users cannot just select an area, and type of project files they want to search for, as they previously did on the legacy Project Status pages. A user looking for project information almost has to know one of the following:

It is possible to generate a search result list, if the user enters the beginning of a document number – such as PD (planned development), TM (tentative subdivision map) , Z (zoning), etc. But this will generate results from all areas of the County. 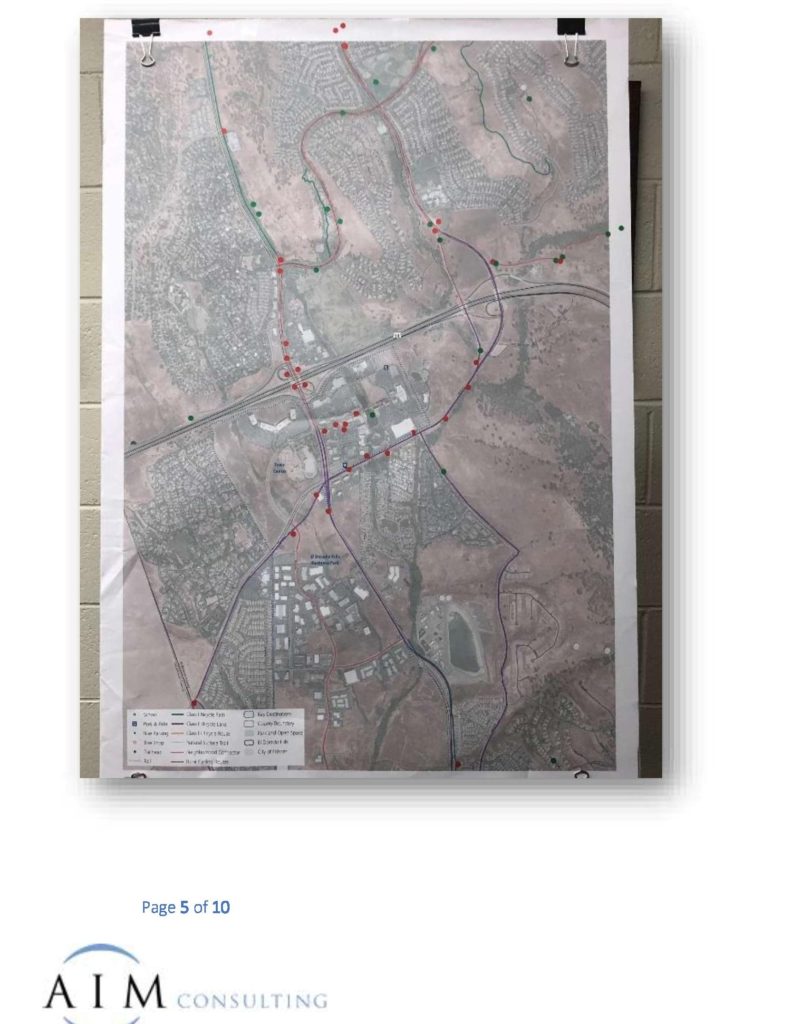 AIM Consulting has released a summary of the results from public comments generated at the May 17, 2018 Community open house for the El Dorado County Line Multi-Modal Transit Center Study,  sponsored by the El Dorado County Transportation Commission and El Dorado Transit. This study is envisioned to find a replacement for the existing El Dorado Transit Park and Ride facility at White Rock Rd and Post St in Town Center (behind the Big O Tires store).

The current facility is maxed out (167 parking spaces). The concept is to provide a more capable facility, to handle more parking spaces and to provide additional services to draw more commute riders into El Dorado Transit Commuter buses into Sacramento and Folsom, and to get more cars off of HWY50. The focus is for  transportation between El Dorado Hills & Sacramento County. Options are being explored to make the facility more ‘walkable’ and ‘bikeable’ as well as amenities like electric charging stations for hybrid and full electric vehicles, access for school buses from school districts, bike lockers, a rideshare drop off lane (Uber/Lyft) and other potential concepts like shops and a cafe. Potential for parking El Dorado Transit vehicles on site is also desired.

Potential sites for the new facility have been located in and around White Rock Rd and Latrobe Rd – the facility needs to be near HWY50 to minimize the time spent getting on and off the highway.

The full study summary is here in PDF Format.

District One Assistant Cindy Munt will be overseeing the website management, and site content, so that the site is maintained with matters, issues, and resources focused on District One and El Dorado Hills. The site features a contact page so community members may submit questions and concerns directly to Supervisor Hidahl’s office, as well as contact information for each member of the El Dorado Hills Community Council Committees and Committee Leaders. The page also features a “Local Communications” section with links to local El Dorado Hills agencies, events, and the most up to the minute details about local news in El Dorado Hills.

To view the site, visit https://www.edcgov.us/Government/BOS/Pages/Board-of-Supervisors-John-Hidahl-District-I.aspx